What your event-driven research is missing: the strategic view 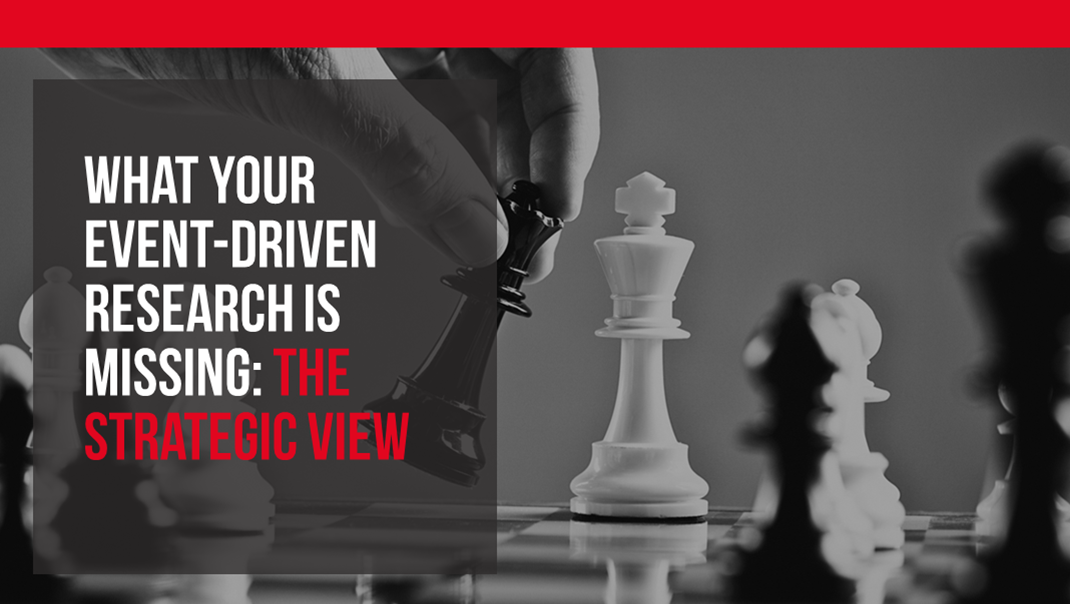 Many years ago, it was simple to know what a customer survey was and how to do it: once a year you'd ask a couple of hundred of your customers to complete a questionnaire rating their satisfaction with your performance against a range of criteria.

It was simple, and it was revolutionary because before surveys came along organisations simply had no robust knowledge of how their customers felt about them. They had anecdotes, of course, but no measurement of attitudes. They had some behavioural measures, which are vital, but those often come too late to do anything to prevent an unhappy customer from leaving.

That annual customer survey delivered the first robust measurement of customer attitudes, and it was a game-changer.

But, after that initial success, many organisations started to become a bit dissatisfied with what their survey was telling them. An annual survey felt increasingly slow and ponderous. There was nothing to stop an organisation with enough customers doing it every quarter, or every month, but even with more frequent surveys the score itself was stubbornly slow to change. It seemed like survey frequency wasn't the problem.

At the same time, businesses wanted more precision from customers, so that the results would be easier to turn into action. They added more and more detailed requirements, but customers just didn't seem to be able to differentiate between all these questions. Surveys became longer and longer, and the scores customers gave became ever-more susceptible to the "halo effect", meaning that they tended to score everything very similarly.

These increasingly frequent, increasingly cumbersome, surveys were expensive, off-putting for customers, and poor value for the organisation.

Surely there was a better way?

The birth of event-driven research

The solution to these problems was to move to event-driven research, a trend which started to take hold in the early 2000s and has accelerated since then.

Event-driven surveys are much easier for employees within an organisation to understand, because they relate to a specific experience which tallies with internal records and data. We usually know exactly what the customer did, when, and who was involved. That makes them actionable, and it means that customers' attitudes tend to be an accurate reflection of the experience they've had.

Rather than dipping into our population of customers for a temperature check of how they feel about us, event-driven research gives us a near-realtime measure of the impact that our people are having on customers at key touchpoints throughout the business. We have a customer measure that can be baked into our MI and even the performance management of staff.

Can you sense a "but" coming?

The benefits of rapid, actionable, feedback from customers at important moments of truth is undeniable, but as organisations have focused more and more on this type of survey they have lost sight of the value of relationship research.

The result is that customer research is seen as a tactical measure, rather than a strategic one. It's about making tweaks and improvements to existing products and services, not rethinking them entirely. It's about customer feedback on the past, not their future behaviour.

This is one of the reasons that the strategic focus on the value of customer satisfaction and loyalty that we saw in books like the Service Profit Chain in the late 1990s and early 2000s is rare to see now. In part it's because some of the battles have been won—most organisations at least say that they believe customer satisfaction is good for business—but it means that the habit of using customer research to inform strategic decisions has been weakened in a lot of cases.

What are you missing if you don't conduct strategic customer research?

First of all, you can't measure everything that matters to customers. Despite your best efforts, there will be touchpoints that you are not able to survey effectively. How important are they to customers? You won't know unless you ask them.

Without that strategic understanding of how customer attitudes drive behaviour, you'll never be able to understand the true value of satisfaction and loyalty, and therefore you won't be able to make good strategic decisions about your value proposition, positioning, and investment in customer experience.

The best of both worlds

In order to get the best of both worlds, you need a customer research programme that combines strategic and tactical research in sensible ways.

Your strategic, relationship survey helps you to understand how your customers see you, and allows you to link that to their behaviour. This is research which is broad, rather than deep, and it should inform nearly every strategic decision that you make. It doesn't require huge sample sizes, because granularity is not the point, it doesn't need to be repeated very often, and the survey questions should paint with a broad brush to reflect how customers think about their relationship with you.

Your tactical, event-driven surveys are much more focused on going in-depth into what you do. They should be close to the event, frequent, and as granular as you can make them. They'll allow you to improve the experience at key touchpoints based on what customers tell you, and see immediate changes to customer satisfaction at that level.

Rather than trying to go deep with a survey that should be broad, or vice versa, make sure you get the best out of each type of research. Tactical research to optimise your execution, and strategic research to make good long-term decisions based in an understanding of what drives loyalty.

Relationship and event driven surveys are both vital tools in customer research. Organisations often make the mistake of committing to one or the other, or attempt the bad compromise of doing both in a single survey. A well designed research programme, including a mix of both su...

Event driven, or transactional, surveys are a tactical tool to help you optimise the customer experience at particular touchpoints. Many organisations use these on an ongoing basis to guide improvements and measure progress.

A customer relationship survey is a strategic tool used in most customer satisfaction research programmes. These surveys will show you where you stand in terms of meeting the needs of all customers, and how this contributes to their behaviour.

Your Survey Mix: Relationship Versus Transactional

Are you committed to event driven surveys with no long term view of how the wider population of customers perceive you? Maybe you’re tracking NPS or CSat with no clear actions on how to move the number up? Stephen Hampshire talks through the benefits of having a balanced research...