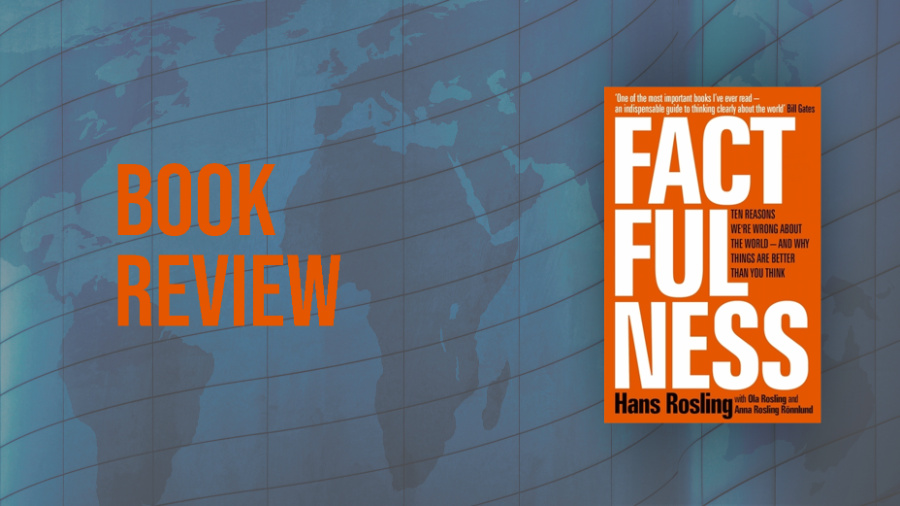 Hans Rosling was a brilliant data storyteller, rightly lauded for his ability to grip an audience with his charismatic, upbeat, use of data about the world. You can find his Ted talks online, and they're well worth watching.

I believe Factfulness is better. This book, finished while Hans was dying and published posthumously, is absolutely essential reading for all of us.

Rosling's message is positive - the world is, for the most part, better than we think it is in terms of healthcare, poverty, education, etc. This book was born out of Rosling's frustration that, despite the popularity of his talks, people didn't seem to be changing their view of the world. As he puts it...

...even people who loved my lectures, I sadly realized, weren't really hearing them.

The problem was not a lack of data, but that persistent cognitive biases we all share tend to lead us to an incorrect view of the world, and these instinctive views are suprisingly hard to change. By describing them, Rosling hoped to equip us with the tools to upgrade our thinking and overcome our preconceptions.

We tend to divide things into groups, and then think in terms of the extremes. For example we create a mental picture of the "developed world" and the "developing world", but most people in the world are now much better off than our mental picture suggests.

Bad things tend to happen quickly (war, famine, natural disasters), while good things tend to be slow (year on year drops in child mortality or people living in exteme poverty). That means most news is bad, but real life is mostly getting better.

We tend to assume that trends, like birth rates, will continue in a straight line rates, and that's rarely the case in practice.

We aren't very good at understanding risks, and we get even worse when we're scared.

We need to categorise things (and people) in order to think about them, but we need to be careful about the generalisations we make. They may lead us to miss opportunities if, for example, we dismiss an entire continent as a business opportunity. "Look for differences within groups and similarities across groups"*.

Societies and cultures change and evolve, often faster than our perceptions of them. "Slow change is not no change", and we need to consciously update our beliefs if we want to think clearly about the world.

It's important to consider other points of view, and not to trust any one view (even from an expert). Numbers are important, but they shouldn't be used on their own to draw conclusions.

Blame "...undermines our ability to solve the problem, or prevent it from happening again...". We should look for causes, rather than villains; systems rather than heroes.

Things are often not as "now or never" urgent as they appear. It's important to make sure we understand them properly before rushing into action that may make things worse.

Each chapter is brought to life by Rosling's straightforward writing, his use of personal anecdotes, and his gift for presenting data clearly and accessibly (one example: when he charts income he uses a doubling scale rather than the more usual, but much harder to understand, logarithmic scale).

He also understands "It's not the numbers that are interesting. It's what they tell us about the lives behind the numbers." By using photographs from his organisation's site "Dollar Street" he illustrates precisely and relateably what life is like on each of the four income levels he describes.

I loved this book, and it received great feedback from most of the other members of TLF Book Club. I asked some of them to provide a "cover blurb"...

Engaging and thought provoking, Factfulness is a book for those who want to have their view of the world challenged and discover how instincts that we all share when making sense of information may be letting us down.

Thought provoking facts about levels and rates of development worldwide but of particular interest for the way the book, and especially their website www.gapminder.org displays them. Clear graphics and engaging storytelling tools ensure that their key messages are effectively communicated.

A positive and eye opening read that equips you with not only the tools to question how to think about the world, but to question any information presented before you.

Purple Tuesday (2nd November) is a day to focus on the disabled customer experience. We share some facts and figures from our panel, and speak to Purple Tuesday about best practice.

The Business Case For Customer Insight

We believe customer insight is an essential part of building a world class customer experience, but we know that selling the concept of customer insight research to internal stakeholders can sometimes be a challenge. With different departments pushing for resource and budget, how...